A Standing Ovation in Adelaide

"Mike McClellan is a modern-day troubadour, with a long history of several hit songs and tours across this wide land – and a few others (including the US) – to his credit, including quite recently. He has worked outside of music, hosted a music talk show on the ABC and he knows a lot of people, first hand.

Spinning a great story comes naturally, both as introductions and as songs. The two sets contain a mixture of new songs as well as some oldies, including several hit songs from the back catalogue and the occasional cover song, often introduced with a twinkle and a story about his meeting or friendship with said artist. This pattern also had a couple of twists; introducing a number of his songs that have been recorded by other artists (including Ricky Nelson).

In terms of songs, as well as enjoying the older hits and the lyrical writing, his relatively new song, Gruch, is a tribute to Adelaide based, now passed, Bryan DeGruchy was the show stealer for me; a gorgeous heart-felt ballad to the man and his guitars (two of Mike’s three DeGruchys were on stage). Mike’s voice stands up to the test of time, his guitar playing is solid picked folk acoustic, he has chops, but only for the service of the song at hand, and his songwriting shows no sign of waning.

While his hits may have been decades ago, the new songs are alive, lyrical and well worth a listen. As for the advertised 100 minutes of gig – it was well over two hours (including intermission) of lyrical melody – a joy!"

Live at The Basement DVD - NTSC format only

Back in 2015 Mike played Sydney's Basement to a packed house.  The solo concert was recorded and released as a DVD.  The PAL version has now sold out.  Only the NTSC version is still available.

Greg Quill was the driving force behind Country Radio and one of the finest song writers to emerge in Australia during the 70s.  Greg died unexpectedly in 2013 and Kerryn Tolhurst, a friend and former band mate, decided that a tribute album should be recorded to remind people of just what a fine writer he was.  The list of those who contributed reads like a who's who of great contemporaries - Ross Wilson, Paul Kelly, Shane Howard, Joe Camilleri, Doug Parkinson, Glenn Cardier, Richard Clapton, Russell Morris, Kevin Bennett and Broderick Smith.  Mike McClellan contributed a lovely version of Clever Lines one of Greg's most poignant songs.  The album is distributed by MGM and can be ordered through any record store.

Why I Love My Acoustic Guitar

Read this article by Mike in the Musicians Friend – click here.

You will notice that we have added a Blog to the website.  There you will find articles on song writing from Mike and almost anything else creative that interests him.  Through it you will also have an opportunity to talk to him, engage in a conversation, ask him a question or just add a comment to whatever is currently on his mind.  Make use of it.  He loves to get feedback.

An audience of marketers at a recent TEDx presentation in Melbourne got to experience a little Mike McClellan magic.  With guitar in hand, he spoke and sang about the importance of establishing and sustaining an emotional bond between you and your customer in tough trading conditions.  He had them in the palm of his hands.  In the words of the organiser Ken Roberts, the CEO of Forethought, one of the smartest research companies in Australia, his speech was "simply masterful".  If you'd like to see it click here

Mike has begun the process of videoing a number of his songs in preparation for the release of a DVD/CD on songwriting, guitar arranging, playing and performing (there may also be a hard copy available at a later date).  As a teaser you will be able to download one song for free, see him play it and get a copy of the lyrics and the guitar tablature.  The accompanying text will explain the techniques and craft behind the writing and guitar arrangement.

The complete singer/songwriter/guitarists manual will be available as a DVD with CD through his shop.  We'll let you know when it is ready for release.

Time. And Time Again.  The Best of the Song and Danceman

The double CD “best of Mike McClellan” collection, Time. And Time Again, is now available once again. Featuring 35 songs remastered from his back catalogue it is now back in print and available only through the shop on this website.  Song and Danceman, The One I Love, Saturday Dance, Rock’n Roll Lady, Good Companions are just a few of the classic McClellan songs restored to a pristine digital format.

"As can be witnessed on the marvellous Live At The Basement DVD recorded in 2015, McClellan is still the consummate performer - a wonderful singer, guitar player and songwriter who keeps the audience in the palm of his hand.

I regard No Intermission as the strongest of his latter day albums and easily the equal of his 70s work.  Don't miss it or the DVD or McClellan himself if he is playing near you."

"The acoustic singer-songwriter is an endangered species in Australia, swimming against the endless waves of electronic pop culture. Mike McClellan’s not drowning, instead he’s defiantly waving a banner that says there is still a place for intelligent, articulate and poetic acoustic music. Mike McClellan is as relevant now as he was 40 years ago, and Dancing In The Rain deserves your attention."

"McClellan, ever the true professional, displayed the skills he has honed over 40 years of entertaining.  The quality of his voice, strong at times yet tender when required, is still reminiscent of the early days.  From the old favourites to the less familiar, plus a tantilising taste of songs from the soon to be released new album, McClellan's playing was as faultless as ever.  After a well deserved encore a satisfied audience had witnessed a master performer."

"That he is one of Australia’s finest artists was proved beyond doubt on Friday night at a scintillating performance to his latest season at the Troubadour. As usual for a McClellan performance the place was packed out and as if to underline his popularity it was announced that the original six-night season now has been extended by a week. McClellan seems to be getting better and better each time he performs.

His voice, always strong and flexible, now carries much more authority; his guitar playing, appealing from the start, has improved to the extent that he must be rated as one of the best in the country; and his between songs patter has the mark of a performer oozing with confidence."

"McClellan is a national asset... an artist this country should be proud of."

"As a performer McClellan is superb in the manner in which he communicates with his audience. For more than two hours he had them in the palm of his hand. With a subtle blend of humour, monologue and music he shares his life and thoughts with an audience. By the end I left knowing a lot more about the man and the musician."

"Singer, songwriter and guitarist extraordinaire, Mike McClellan left an audience at Her Majesty’s in no doubt that he is one of this country's finest talents."

"If there was only one day left in the Universe and I had to choose between a Mike McClellan workshop and an accordion demonstration I would go to the latter.... I couldn’t stand the thought that Mike’s workshop would be his last." 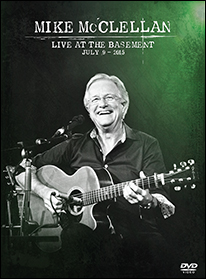